Posted by Thomas Cann from huffingtonpost.co.uk·Jul 13

The number of people who have died in the UK after testing positive for coronavirus has risen by 11 over 24 hours – the lowest daily rise since early March.

The Department of Health and Social Care (DHSC) said 44,830 people had died in hospitals, care homes and the wider community after testing positive for coronavirus in the UK as of 5pm on Sunday, up from 44,819 the previous day.

This is the lowest number reported by DHSC since March 12 – when one death was recorded. But reporting is often lower on weekends and the government figures do not include all deaths involving Covid-19 across the UK, which are thought to have passed 55,500.

Here’s a quick primer on what all the different numbers mean and how to understand them.

The DHSC also said that in the 24-hour period up to 9am on Monday, there had been a further 530 lab-confirmed UK cases. Overall, a total of 290,133 cases have been confirmed.

The figures come as Boris Johnson has urged the public to wear face coverings in shops, and said an announcement on whether their use will be compulsory in England will be made in the coming days. 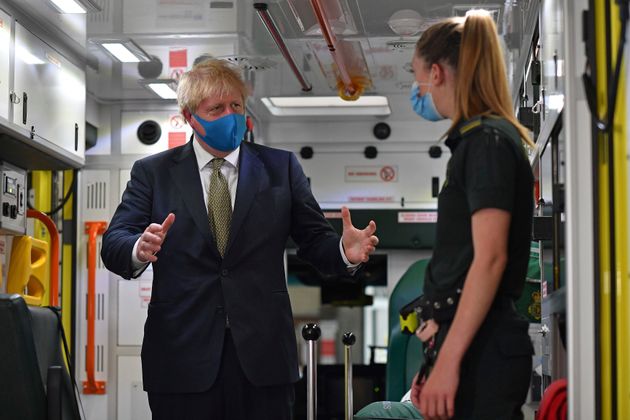 The prime minister said that ministers are considering what “tools of enforcement” could be employed as he described the evidence to support their use to slow the spread of coronavirus as “growing”.

Downing Street said on Monday that a formal review was under way after the government faced calls for clarity on the subject.

But Labour called on the Government to address the “confusion” around the use of non-surgical masks “without delay”.

Stricter measures for shoppers in England could bring the nation into line with Scotland, where first minister Nicola Sturgeon made their use compulsory in shops as of Friday.

The PM, wearing a covering during a visit to the London Ambulance Service, said they “have a great deal of value in confined spaces” where people are coming into contact with those they do not normally meet.

He said: “Yes face coverings, I think people should be wearing in shops and in terms of how we do that, whether we will be making that mandatory or not we will be looking at the guidance, we will be saying a little bit more in the next few days.

“We will be looking in the next few days about exactly how, with what tools of enforcement, we think we want to make progress.

“As the virus comes down in incidence and we have more and more success, I think face coverings are a kind of extra insurance we can all use to stop it coming back and stop it getting out of control again.”

Meanwhile, Wales’s First Minister Mark Drakeford said the nation would be brought into line with England and Scotland when face coverings are made compulsory on public transport in Wales from July 27.

What's next for Verizon Media