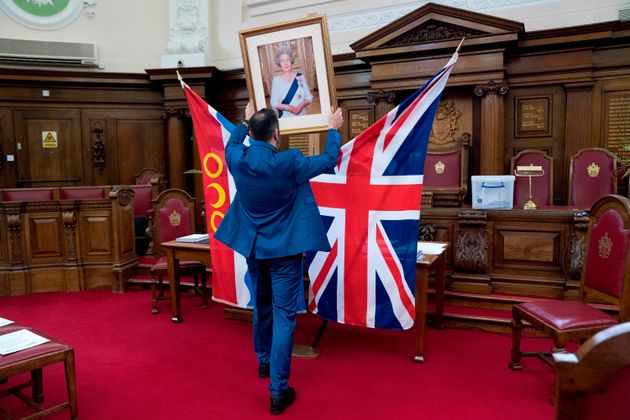 This week, 181 historians signed an open letter demanding that the Home Office correct historical inaccuracies in the handbook which accompanies the UK’s citizenship test.

While asking would-be citizens to learn from a biased version of history is worrying, it’s high-time we got rid of this racist test altogether.

Since 2005, adults applying for citizenship in the UK have been required to take the “Life in the United Kingdom” test.

It’s a 45-minute exam which requires the applicant to regurgitate a range of pub-quiz style trivia in order to hit the 75% pass-mark.

The required reading is a dedicated handbook called “Life in the United Kingdom: A Guide For New Residents.”

The share of the book dedicated to the colonialism on which Britain’s wealth is founded is conspicuously slim, and has this week been shown by historians to be characterised by falsehoods and bias designed to whitewash Britain’s past.

Asking migrants to demonstrate knowledge of an arbitrary body of facts on which the rest of us are never tested points to a two-tier system, much like the “citizens” and “subjects” of the British Empire.

The role of enslaved people in battling and abolishing slavery is erased, as are the resistance movements that precipitated the end of Britain’s colonial rule. (In addition, there isn’t a single Black person depicted in the book, and there are only two images of people of colour across its 180 pages; the Home Office evidently sees whiteness as an important part of life in the UK.) Passing the test does not guarantee citizenship. It’s just one of many hoops that must be jumped through before an application is even considered, a process that costs £1,330 per person.

While the removal of misleading content from the UK’s citizenship curriculum looks like a step towards reckoning with the realities of our colonial history, it makes little sense to slightly improve the representation of colonialism within a construct that is itself characterised by colonialism.

Asking migrants to demonstrate knowledge of an arbitrary body of facts on which the rest of us are never tested points to a two-tier system, much like the “citizens” and “subjects” of the British Empire. It reminds us that some of us belong, while others must learn to imitate a highly-doctored national self-image.

There are two main routes to UK citizenship: automatic acquisition at birth, or naturalisation as an adult. Given that the world is carved into states, citizenship is critical to a person existing as a visible member of a society and having secure access to state protections. As philosopher Hannah Arendt put it, a stateless person does not have the “right to have rights.”

The hundreds of thousands of infants who are granted citizenship automatically at birth have had no opportunity to show commitment to, or knowledge of, the polity, and are never asked to demonstrate their competence or commitment.

What justification can be given for granting citizenship routinely to an oblivious infant, but withholding it from an adult who has knowingly requested it?

If the logic is that growing up in the UK means that one somehow imbibes the culture, that seems misguided, because people do not merely receive cultures, they build them, change them, struggle against them.

Cultures are not static or homogenous, they are bricolages of which new citizens become authors. To speak of British culture and history as learnable monoliths that can be summarised by the Home Office is not only to gloss over the reality that experiences of life in Britain are diffracted by race and class, it is also to ignore the fact that, precisely because of its colonial past, British culture and history is bound up with that of would-be citizens.

The citizenship test should be revoked as a first step to undoing the moral vanity of “Britishness” which underwrites our increasingly hostile environment for migrants and people of colour.

Britain’s imperialism has defined the modern history of almost all the common countries of origin of those seeking citizenship in the UK, among them: India, Pakistan, Nigeria, Bangladesh, Nepal, South Africa, and Somalia. Since Britain has long featured in these migrants’ lives without their consent, and against their interests, being granted UK citizenship is better understood as reparation, rather than an act of benevolent inclusion. Moreover, these migrants have much to teach Britain about its own history. Instead of testing them, we would do better as a nation to learn from them. Why not ask Iranians or Palestinians to tell us about the history of British imperialism, ask Indians about famines and massacre, Iraqis about invasion, or Kenyans about genocide?

There’s a second sense in which not all UK citizenship is alike, and it relates to a story that’s also currently in the news. Shamima Begum, who as a 15-year-old left her home in Bethnal Green to join ISIS (and ended up in a refugee camp, having watched her three children die), was last year stripped of her British citizenship. Earlier this month she was granted the right to return to the UK to fight her case. Begum has fallen victim to a racist change of law that took place in 2014 making it easier to revoke the citizenship of those who gained it through their own naturalisation, or through parents who were naturalised.

In essence, the citizenship of migrants is never really secure, but is conditional, and readily weaponised. Not all citizens are equal; how you got your citizenship is never forgotten.

New citizens should of course have opportunities to learn about the UK political system and other state institutions, but these competencies ought to be as optional as they are for everyone else. Requiring migrants to prove their knowledge of and commitment to “British values” compels them to engage with and become complicit in Britain’s delusions about itself, which is particularly morally troubling given that so many have left countries decimated by British colonialism and neo-colonialism.

The UK citizenship test is the empire’s last overt “civilizing mission” for racialized others. Its function is to place one more exasperating barrier before Britain’s unwanted migrants, to make them grovel for their seat at the table by proving that they like us, and that they are like us.

Like the sociopathic stepmother’s obsequious looking glass in Snow White, Britain holds up its trick mirror and asks “who is the greatest of them all?” as its latest aspirants dutifully echo its mythology. The citizenship test should be revoked as a first step to undoing the moral vanity of “Britishness” which underwrites our increasingly hostile environment for migrants and people of colour. It’s time to definitively break that mirror and confront the many unflattering images it casts.

Arianne Shahvisi is senior lecturer in ethics at the Brighton and Sussex Medical School.

How to Effectively Get More Clients Through Cold Emailing

Google Chrome is getting safer than ever