Posted by Lillie Snow from huffingtonpost.co.uk·Aug 11 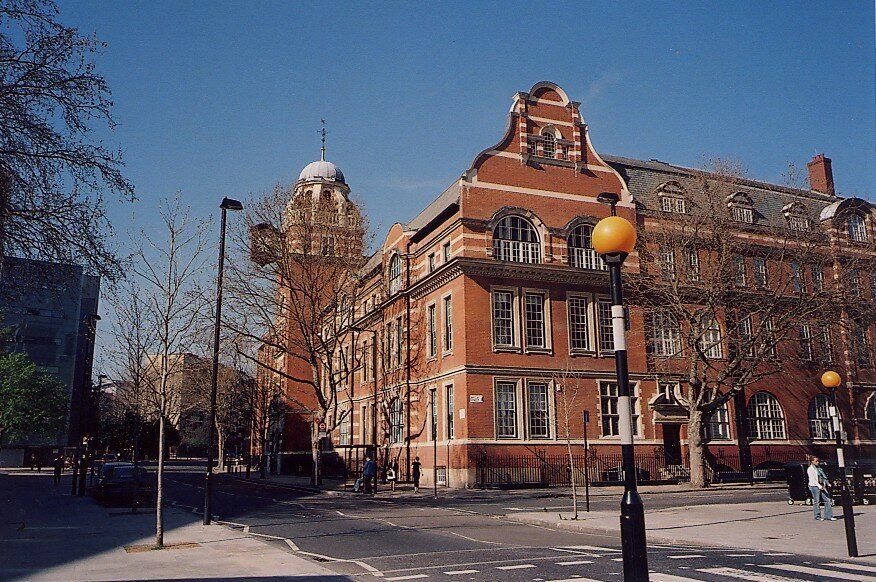 A student at City, University of London considered dropping out after a lecturer accused them of being “unprofessional” in front of a packed lecture theatre for wearing henna, which the tutor described as “weird brown stuff”.

It is one of a string of claims of discrimination and microaggressions towards Black, Asian and minority ethnic (BAME) students that were shared with university bosses as City attempts to tackle racial injustices on campus.

BAME staff were invited to share their experiences of racism at a so-called “town hall” meeting organised by the university on July 20, while City Students’ Union shared students’ anonymous accounts.

The student wearing henna – which is a traditional practice at some Hindu, Sikh and Muslim weddings and other religious festivals – was told by their health sciences tutor that it would make their patients feel “uncomfortable”, the meeting heard.

“It was a highly embarrassing moment for me and I seriously considered dropping out because I wasn’t good enough,” the anonymous student said.

In a video created by the union that was shown at the meeting, a Muslim health sciences student described how she was forced to buy her own uniform for placement because of the university’s failure to understand “the issues faced by Muslim women”. 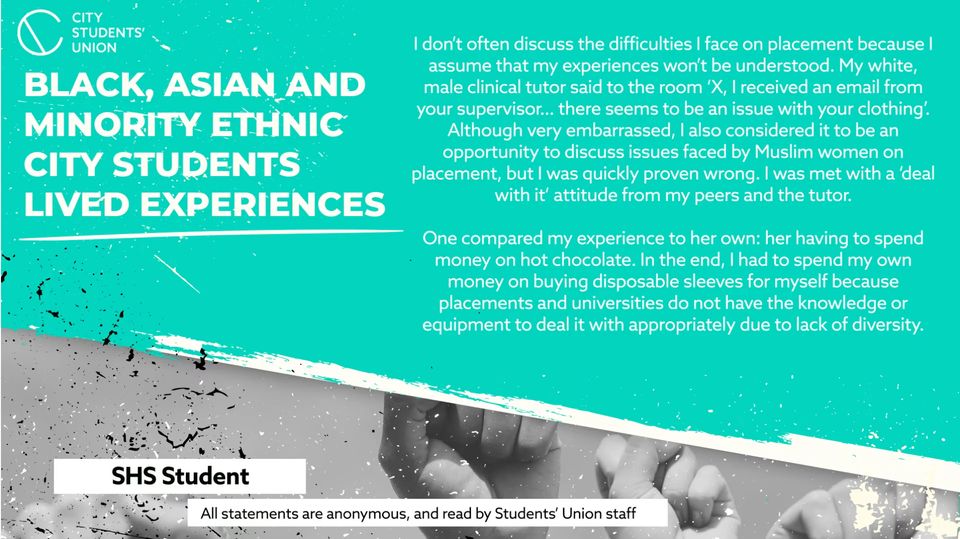 After being told there was a “problem” with her clothing because she was wearing sleeves, she tried to explain the situation to her tutor. “I was met with a ‘deal with it’ attitude from my peers and tutor,” she said.

“In the end, I had to spend my own money on buying disposable sleeves for myself because placements and universities do not have the knowledge or equipment to deal with it appropriately due to lack of diversity.”

Another student described how, despite the fact that City is a diverse university, its journalism course is predominantly white.

“It has been challenging to navigate complex and sensitive matters around race and gender when you are the only person in the room who has personal experiences,” they said.

“We have felt isolated and like we didn’t belong on our course, which has had a detrimental effect on our work.

“If City is truly dedicated to its pledge to stamp out institutional racism, it is important that they employ BAME members of staff, protect freedom of speech and encourage diversity of opinion.” 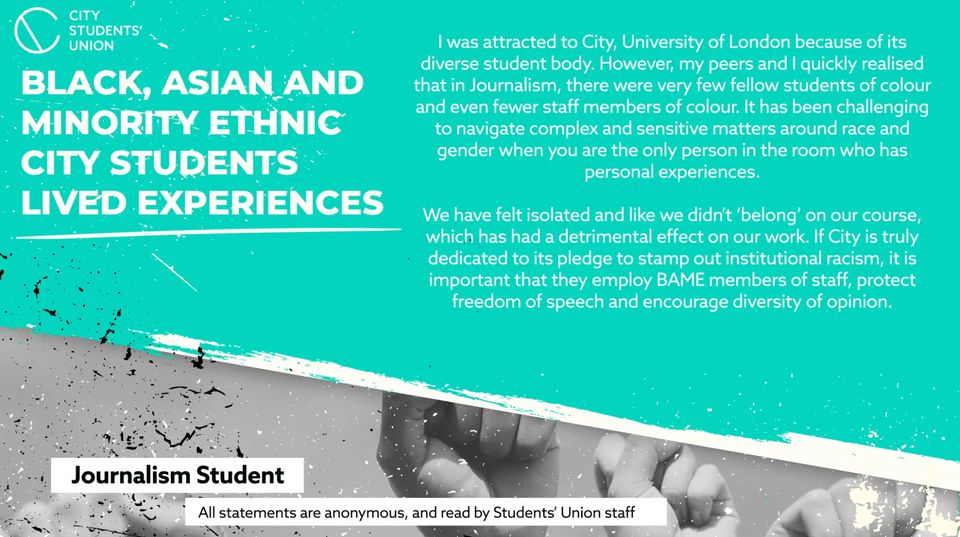 City, University of London, has said it is dedicated to tackling racial injustices.

In July, the university approved an “ambitious” new equality, diversity and inclusion strategy and started the final steps to join the race equality charter.

Shaima Dallali, who is vice-president for community and wellbeing at City Students’ Union, said the university must “work towards a fairer admission system, take reports of racist incidents seriously and take leaps, instead of steps, to rectify the BAME attainment gap”.

Meanwhile, staff should take a “critical view” of their curriculum and make it “representative of our values and student body”, she said.

Dallali added: “The world around is changing and a fairer society is on the horizon. In light of a global call for equality, the time for action is now and there is ample opportunity for the university to reflect on its practices as an institution.

“It is a time for us to be introspective and innovate to become a leading institution for social justice which champions inclusion, diversity and equality.”

Professor Zoe Radnor, who is City’s vice-president for equality, diversity and inclusion, said the university was “listening hard”, calling the meeting a “powerful experience”.

“We are sorry that any of our students have had these experiences whilst at City,” she said.

The meeting was one in a series of activities organised by the university’s executive committee to “signal their personal commitment to racial equality and to increase their understanding of racial issues experienced by students and staff”, she explained.

“We recognise that the experiences discussed by our staff and students are difficult to speak about, even to such a small internal audience.

“The president, the executive committee and I want to reassure all of our staff and students that we will listen to you, we will work to understand and we will support you.” 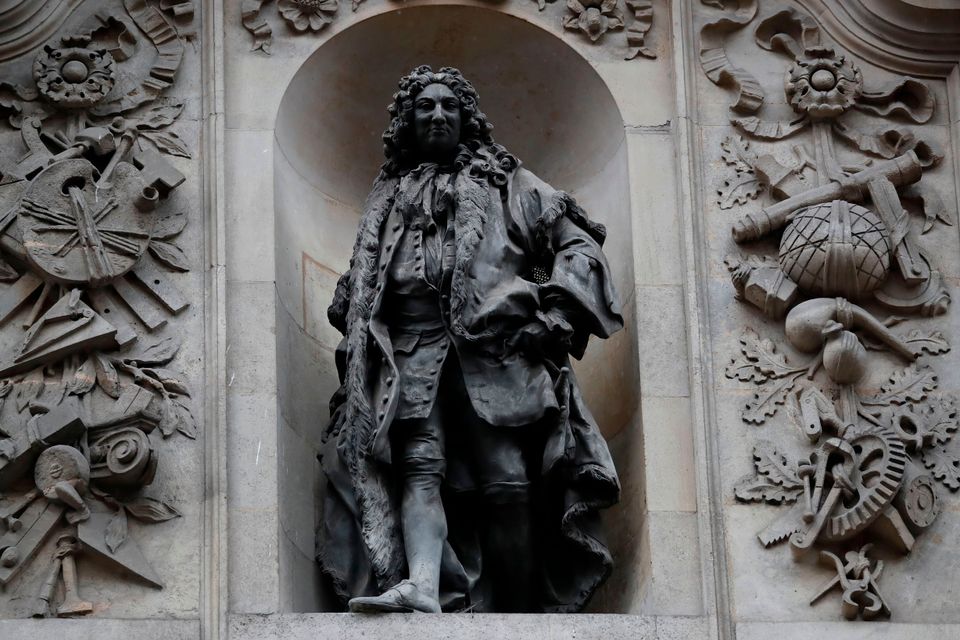 The move by the university comes just weeks after it announced plans to rename its prestigious Cass Business School, whose namesake Sir John Cass was a “major player” in the transatlantic slave trade in the 17th century.

The university announced in July it would ditch Cass’s name – which was added to the business school following a donation from the Sir John Cass Foundation in 2002 – saying the connection had caused “great pain and hurt” to students and staff.

However, HuffPost UK reported how a group of business school graduates launched a petition demanding that the university either retain the Cass name – or compensate them for a loss of “value” to their degrees.

The alumni said removal of the Cass brand would make their CVs less impressive.

qbcfmonitorservice not running on this computer | Complete Causes and Solutions

First but not the last sweatshirt

London calling: 5G coverage in British capital grew during second half of last year with fastest speeds on Vodafone