Posted by Shane Higgins from huffingtonpost.co.uk·Aug 14

Elderly vulnerable people and their families are being forced to lie about having coronavirus symptoms to get tests just so they can enter care homes, ministers have been warned.

HuffPost UK has heard the story of one woman who was advised by her GP and social worker to lie about her 97-year-old mother having Covid-19 symptoms so she could access a government test that would allow her to enter respite care if the result was negative.

Care industry figures suggested the case was illustrative of a wider problem across England amid fears that carers and vulnerable people who need to get respite care cannot access it.

And care minister Helen Whateley has been urged by the Liberal Democrats to issue clear guidance so all those entering care homes from the community can get access to tests, to stop the virus spreading among vulnerable people.

The government has been severely criticised for its policy on care homes in the early stages of the pandemic, following the deaths of thousands of residents.

Currently, anyone with Covid-19 symptoms in the community can get a test.

Care homes can also apply for coronavirus tests for residents and staff. Regular testing for staff (weekly) and residents (every 28 days) was also rolled out last month, and people entering care homes from hospitals are routinely tested.

But the government’s testing guidelines make no mention of how people entering care homes from the community, particularly for respite care, can access a test if they do not have symptoms.

HuffPost UK heard the story of one woman, Angela*, who was seeking two weeks of residential respite care for her mother to allow her and her sister a break from caring and the opportunity to go on holiday with family.

The daughters had been left looking after their mother, who has vascular dementia, since the beginning of March after the pandemic forced the day care centre she attended to shut down.

Angela was recently advised by her mother’s social care worker that her local authority would fund respite care for two weeks to allow the two daughters to go on a separate holiday.

The care home Angela found for her mother said she needed to obtain a negative coronavirus test before entering the care home so other residents were not put at risk.

But Angela was told on the government testing hotline that tests were only available to people in the community if they have coronavirus symptoms, meaning she could not place her mother in the care home.

Her social worker and GP were then forced to advise Angela to lie about her mother having Covid-19 symptoms so she could access a test and get her mother into the care home.

“I thought: this is awful,” Angela told HuffPost UK. 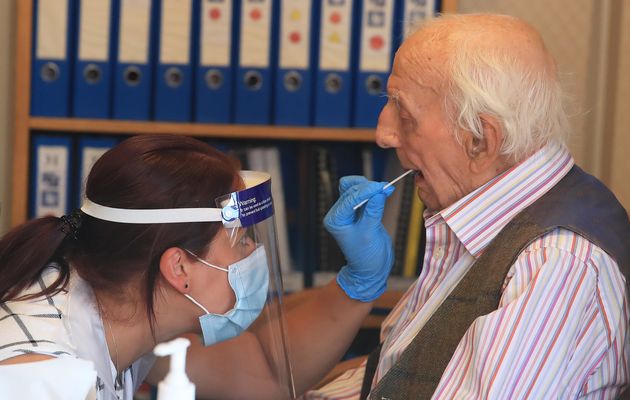 “Here we are with social service and medical professionals having to advise you effectively to tell lies in order to get what is a perfectly reasonable request – a test to get an old person admitted to a care home.

“I think the whole situation is completely mad and the emphasis on the eligibility criteria – where you are coming from rather than where you are going to – is just totally illogical in my mind.

“I have to lie. I was really incensed – I really resent having to do that.”

Lib Dem health and social care spokesperson Munira Wilson, who has written to Whateley urging action, said: “The case for testing every resident before they enter a care home, whether that’s patients being discharged from hospitals or patients entering from the community, is unequivocal.

“We need to make sure no one is forced to make up symptoms just to secure these vital tests.

“Testing is a vital part of keeping people safe from this dreadful virus, and preventing it from spreading unchecked.

“Ministers must issue clear guidance to ensure all care homes can access testing for all those coming into care.”

Professor Martin Green, chief exec at Care England, said: “It is essential that community testing is prioritised in order that those in need of respite care are able to access it.

“Moreover family members that are full time carers may need a break and become unwell themselves unless they have access to respite care.

“Testing is essential to provide confidence for individuals, service providers, residents and relatives”.

“Obviously from a hospital or another care home it [testing] can be done, but not if you are in the community coming into a care home for respite,” he said.

“Someone should be able to flex and change it so you could be admitted, because it’s for the person’s benefit.”

He added: “I would hope people use common sense – if it’s about that person’s best interests and they need that respite care then someone should say that’s a valid reason for a test.”

The Department of Health and Social Care is expected to publish new guidance soon.

A spokesperson said: “Care homes shouldn’t refuse people who haven’t been tested as the care home itself will do a test.”

*Name has been changed