Posted by Cornelius Jones from huffingtonpost.co.uk·Aug 27 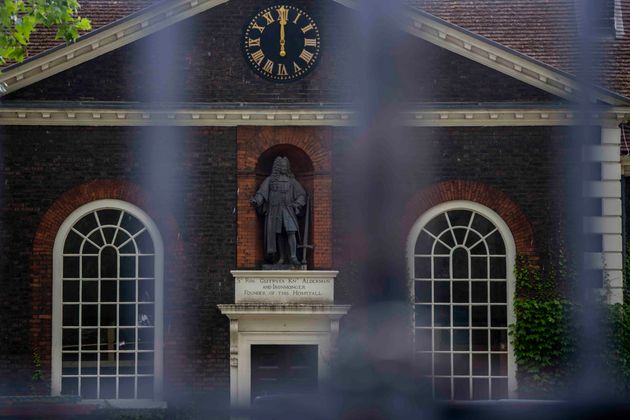 A senior government minister advised an east London museum not to remove the statue of a controversial slave trader – a decision it went through with despite a consultation finding that most people wanted it taken down.

The director of The Museum of the Home feared being “extremely compromised” by an intervention from culture secretary Oliver Dowden, who suggested leaving up the statue of Sir Robert Geffrye.

Dowden wrote in a letter to the museum that “removing statues, artwork and other historical objects is not the right approach” in the wake of the renewed Black Lives Matter protests this year.

It came after director Sonia Solicari had warned that it was a “traumatic” time for the organisation because of high-profile petitions singling out the Hackney museum.

The minister’s pleas and the museum’s concerns have emerged from emails and a letter sent between The Museum of the Home and the Department for Digital Culture, Media and Sport (DCMS) seen by HuffPost UK.

They also show how the museum had a draft public statement prepared saying that it had taken Dowden’s views into account, but a departmental staffer told them to remove the statement and refer to “relevant government agencies”. 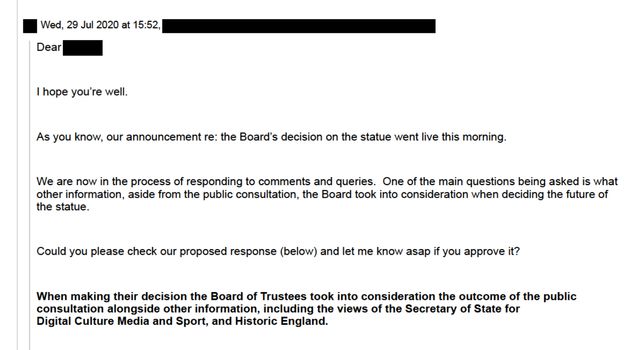 Following protests, the museum’s board of trustees decided to “acknowledge the legacy of colonialism and slavery within our history” and ask the local community what should be done with the statue.

But last month, the Museum of the Home announced the statue would remain despite acknowledging that “overall, the response [of the public consultation] was in favour of removing the statue”.

Solicari raised her fears with the department before the museum received a letter from Dowden on June 25.

“This might place us in an extremely compromised position if the public consultation suggests overwhelmingly that we take the statute down,” she wrote on June 18.

In the letter to the museum’s chair Samir Shah, Dowden writes: “Following the removal of the statue of Edward Colston on the June 7, the debate around the role of statues and memorials in our public spaces has been intense.

“You play a crucial role in conserving our heritage assets, caring for our national
collections, providing access to knowledge and leading efforts to offer cultural education to all.

“I am aware that the issues of contested heritage provoke strongly held views, and that right now these issues will be in the forefront of your minds. I therefore wanted to share with you the government’s position on these issues.

“The government believes that it is always legitimate to examine and debate Britain’s history, but that removing statues, artwork and other historical objects is not the right approach.

“Confronting our past may be difficult at times but, as the prime minister has
stated, we cannot pretend to have a different history. Historical objects were created by previous generations, who often had different perspectives and different understandings of right and wrong.”

It added: “As a government-funded organisation, I would expect you to be mindful of the above approach, which has been agreed with Historic England. If you plan to make any statements or actions in relation to this issue, please contact DCMS in advance of doing so.”

The monument to Sir Robert Geffrye at the Museum of the Home honours a 17th century merchant who made his fortune trafficking Black people with the East India Company and Royal African Company.

When deciding not to remove the statute, the museum’s board added: “Feedback showed that what to do with the statue is a complex debate, full of nuance and different opinions.

“On balance the board has taken the view that the important issues raised should be addressed through ongoing structural and cultural change, along with better interpretation and conversation around the statue.”

THE STATUE OF UNITY

'Lost' statue of Alexander the Great found in museum warehouse

Facebook ordered not to apply controversial WhatsApp T&Cs in Germany

How a Geeky Superhero Fan Revived a Failing Comic Con