Everything You Need to Know About Bose Sleepbuds II

Recently Bose launched its premium Sleepbuds of second-generation named Bose Sleepbuds II. With this launch, Bose has taken another attempt to deliver soothing night-time earbuds which promise to give improved noise-masking and more comfort compared to the first-generation Sleepbuds by Bose.

The Sleepbuds II also has battery issues fixed in it because earlier this issue had forced Bose to discontinue the original Sleepbuds and they had to refund all owners.

The Sleepbuds II weighs much lighter compared to its predecessor. They have impressive proprietary ear tips that fit more comfortably and more securely into ears which makes them best intended for use to isolate yourself from different disturbances. Bose masks the disturbances rather than cancelling them.

With the Sleepbuds II, you get 14 noise-masking tracks. These track error frequencies of the common disruptions during night time. They are layered under custom audio of Bose. The Sleepbuds II has 15 new Naturescapes that will help you with the relaxation. These Naturescapes include sounds like a boardwalk or walk down a country road. You also get 10 Tranquilities to help you decrease your stress levels. In total, the Sleepbuds II offers over 35 tracks. 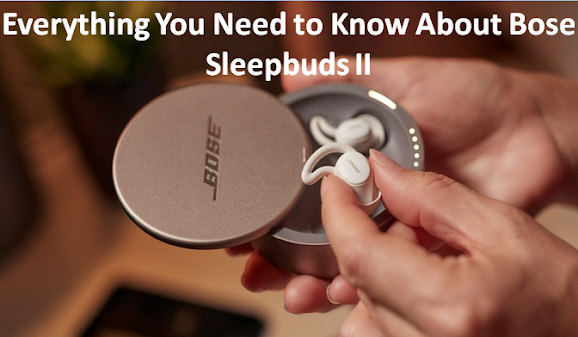 Each of the two buds is a quarter-inch deep. They are shaped like that, so as to reduce any discomfort while the individual lays down on the pillow. These buds are intended to equalize pressure, and they won’t leave your ears easily. The Sleepbuds II comes in three sizes of soft silicone tip. You will also see a new anti-friction coating added to them, so as to stop them from squeaking while they get rubbed on your fabric while you lay down your head. The Sleepbuds II are also IPX4 sweat and water-resistant.

Bose Sleepbuds II has a new etched antenna design providing a better Bluetooth LE connection to you. Also, you can store up to 10 files from the Sleep App library on these earbuds, in case you want standalone playback.

The Sleepbuds II comes with a new NiMH battery which is rated to provide over 10 hours of usage over a single charge. The Sleepbuds II has got a new anodized aluminum case for charging them which can charge the earbuds for four times in total.

So, this was our review regarding the all-new Bose Sleepbuds II which should go on sale on October 6. They will come with a price tag of $249.95. If you don’t want to wait for their release, you can pre-order them now as the company has started taking pre-orders.

Esta Lubowitz is a innovative individual who has been writing blogs and articles about cybersecurity. She writes about the modern updates involving office.com/setup and how it can enhance the work journey of users. Her articles have been posted in many famous e-magazines, blogs, and websites.