Genshin Impact: How to Get 5 Star Weapons and Characters

In a very short period, Genshin Impact has earned a massive reputation among the players. They have earned a remarkable number of players and received positive responses from all around the world. Developers have done an excellent job of adding a huge variety of characters, abilities, weapons, and hidden rewards. The great thing about Genshin Impact is that players can play it on their smartphones as well. 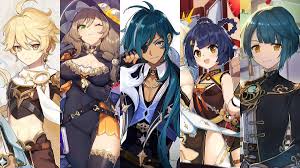 To unlock characters and weapons, players have to pass the levels. Genshin Impact’s beginning levels can create problems, but after understanding the basics, players can easily move forward. While plenty of characters are available in Genshin Impact, they all possess different abilities and strengths. 5 Star characters are the strongest in all but obtaining them is nowhere easy. Some of the players are curious to obtain weapons and 5-star characters, but without a correct guide, it’s very difficult.

For the beginners, the only way to obtain the weapons and characters is to make wishes through the Gacha system. Players should invest in Intertwined Fates and Acquaint to get the specific character or weapon to play. However, this process doesn’t guarantee that you’ll get a 5-star character or weapon, but it increases the chances. Currently, the Ballad in the Goblets event is live, it is the best time to get a specific character.

The concept of obtaining items, characters, and weapons in Genshin Impact is different from many games. However, players are admiring the experience they’re getting from the game.