Shonen manga magazine Weekly Shonen Jump has a vast catalog of series to choose from, and it regularly adds new ones that it is often challenging to keep up. Since there is so much competition, many of the titles are canceled due to low readership. The lack of interest is an essential indicator for the magazine to make decisions about the future of a specific title. Even the well-known successful creators like Tite Kubo, Masashi Kishimoto are not spared if their work does not perform well enough. Every year we have a new title that takes the fans by storm and grows popular worldwide. Today we look at some of the most underrated manga right now that people should be paying attention to before they are canceled for lack of interest from readers. 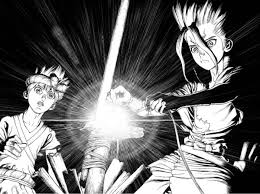 After a cop is fired several times for crossing the line, he is given the opportunity to work on a new case. He has to investigate a mysterious girl raised by a dolphin and captured by the Cult of the Sea. The dolphin is a police officer as well, and the absurdist series does a great job of adding unrealistic elements to an otherwise casual setting. The dry, mature comedy is quite entertaining and successfully captures the readers’ attention for long periods. The manga has been around since July, and you must give it a shot if you have not read it yet.

Saburo Kono, a photographer by profession, moves into a haunted house, which is so notorious that no one wants to live there. A boy named Sota lives in the neighborhood of this haunted property. When one they meet and Saburo makes the claim that the camera he uses can capture the spirit of the dead people, Sota doesn’t seem convinced at all. However, all of his doubts are soon laid to rest. The recently published Spirit Photographer Saburo Kono is an exciting new addition to horror manga. It has tremendous potential to become something big. Created by the same team behind the Promised Neverland, if things go well and the one-shot is expanded upon, the manga will surely be a superhit of its genre.

The manga Agravity Boys recounts the story of four boys. But they are not any other ordinary group as they travel through space and land on a-Jumbro, a habitable planet. However, it takes a very dark turn immediately as a black hole swallows Earth. The end of the world also means the end of humanity, but before they could think what they ought to do now, the boys find out that there is a Higher Being that lives on this planet. Unfortunately for them, it is not as friendly as they might have wished since it starts testing the boys’ loyalty to each other through different hardships. However, one must not be fooled by its apocalyptic origins because the manga takes a comedic take on the bonds between people. Since December 2019, Agravity Boys has been getting more and more attention, but it is still not popular enough to not be canceled. So, if you love sci-fi manga, the Agravity Boys might be something that you enjoy.

Undead Unlock is a story of a girl named Fuuko who can inflict bad luck on anyone just by touching them. She had unknowingly, even cursed her own family because of which they all died premature deaths. After contemplating everything, she comes to the conclusion that she will be better off dead since her curse is too dangerous for anyone who comes near her. However, when she tries to commit suicide, someone intervenes only to fall in front of an oncoming train. But surprisingly, he doesn’t die. The muscular man is Andy, and he has the power to regenerate from any injury, which means he would probably live forever. When he meets Fuuko, he realizes that she might be the only person who can kill him, no matter how much she wishes not to.

The series soon shifts its focus when a superpowered individual tries to eliminate Fuuko to study Andy. Although she doesn’t want to get into it, soon she finds herself in a conflict against God. Undead Unlock is an excellent manga that takes one on an unforgettable journey.

Mash Vandead lives in a world where almost everyone can harness magical powers. After spending most of his life in the forest, he goes to the Easton Magic Academy. However, Mash is unique since he does not have any magical powers. But it would be a mistake to presume that he is powerless; even though he might not be gifted with magic powers, he easily makes up for it with his strength. Mash is extraordinarily strong, and with every spell he masters, his power increases exponentially. The manga has already drawn parallels with Harry Potter. However, its comparison with other manga like My Hero Academia makes even more sense since the protagonists in both are people without powers born in a world filled with it. Mashle: Magic and Muscles is a great manga, and if it gets more attention, it has the potential to be as big as My Hero Academia.