Technological trends are rapidly evolving and bringing new ways of living. Mobile applications are the greatest invention of technology and play a critical role in human life today.There are a variety of technology trends in the software development process that leverage the magic of mobile apps.React native is the latest trend in mobile app development and became a storm among the developers,business from different industry verticals are preferring react native and Hire expert react native developers in India. 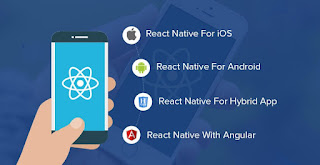 React native is a JavaScript open source framework created by facebook to develop native apps on Android,iOS and Windows platforms.The main advantage of react native is it is not platform specific ,developers can code once and the code can run on multiple platforms.Manny famous apps like Instagram,SoundCloud Pulse ,Wix,Bloomberg ,Pinterest including facebook are created with React native.Some of the advantages, such as the following, make this technology popular among developers.

Today you can see a host of technologies,so why react native is trending ? why business from different industry verticals Hire react native developers for their digital transformation.Lets have a look at the benefits of using react native for app development.

React native platforms can reduce time to market.React native is connected with a huge number of communities ,it allows the developers to search and ask questions related to react native app development,they will get guidance from experienced developers.The coding reusability reducing the time taken for developing a cross-platform mobile application.Apart from this easy migration and third party plug in support make the app development cost low.

React native is an open source platform ,which has a very large community of programmers available online working constantly towards bug fixing, feature improvement and helping people to use it at ease.

Hot Reloading is one of the best benefits of injecting new versions of files that you have updated while keeping the app running.

React native allow to Without writing a single line of platform-specific code, React Native enables you to build complete, full-blown applications that look, run and feel native.So if you are looking to build a React Native app for your business, you have to hire expert react native developer in India who is skilled in components of native user interfaces, design of hybrid mobile app development and programming interfaces for applications.

The maintenance time for an app built on React Native is a lot less as well and the updates are easier to make.Developers who are not skilled in this will quickly pick up on the slack and start coding, and the QA team does not want to waste extra time building test cases, thus reducing the time and money spent on fixing and upgrading bugs.

Skill of the developer

Before hire react native developer, the basic and advanced skills must be tested knowledge in

If your project is small or big Hire best react native developer in The industry who has the following qualities.

Hire dedicated react native developers who can develop apps with high quality.React native is going to be the norm soon and lot of companies are going to switch to react native.

Competitive Advantage in a Commoditized Industry

This man spent $5,000 of his own money to put Zimbabwe on Street View

Where teens spent their gaming money this summer

How Much Money Is Being Spent on Paper Advertising

The impact of block chain technology in healthcare sector