Posted by William Hill from huffingtonpost.co.uk·Apr 03 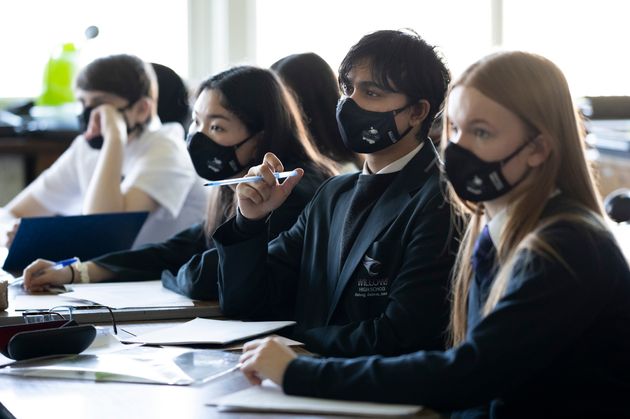 The coronavirus pandemic has sparked a surge in young people wanting to study science and healthcare, universities have said.

Centres across the UK have noted a significant rise in applications for courses such as biomedical sciences and pharmacology from teenagers who say they want to “stop the next pandemic”.

In February, the university admissions site UCAS said applications for nursing courses had risen by almost a third, with increases seen from both 18-year-old school leavers and mature students aged 35 and over.

Although UCAS said it was too early to publish figures for individual courses, HuffPost UK reached out to universities across the UK who confirmed they had received a huge rise in interest in science and healthcare programmes.

Dr Gianpiero Calabrese, a pharmaceutics lecturer at the south London university, told HuffPost UK the surge of interest showed “how more young people are realising just how crucial healthcare and science-based roles are to our society”.

The Covid-19 pandemic had played a “massive part” in the increase in nursing applications, the university’s head of nursing, Dr Julia Gale, added. “The public has seen what amazing job nurses do and how hard they work, so it has brought a highly-respected profession to the fore.

“Seeing this on the news every day has made people want to come into nursing to make a huge difference.”

At Brunel University in west London, Dr Anthony Tsolaki, a senior lecturer and undergraduate admissions tutor, said he noticed students are “moving towards areas related to the pandemic”.

“I have a strong feeling that there has been a shift to study microbiology, genetics and epidemiology,” he told HuffPost UK.

“This will be more discernible in the next academic year probably. I teach Microbial Pathogenesis and my lectures on Covid-19 have been well received.”

Anglia Ruskin University in East Anglia said it had seen a 40% increase in applications for biology-based courses and a 32% increase in biomedical science since the start of the pandemic.

Covid-19 may have also contributed to young people becoming more interested in STEM (science, technology, engineering and mathematics) courses as a whole.

Bath University told HuffPost UK it had received 18% more applications for pharmacology, 12% more for biomedical science and 17% for biochemistry.

It also pointed to an increase in courses in mathematics, statistics and data science, which “suggests that there is a greater interest in statistical modelling and the use of mathematics to understand trends and explain data”.

Reading University said it had also seen a rise in overall applications for science-based subjects, particularly in pharmacy as well as mathematics and statistics.

The pandemic’s impact on a surge of interest in the sciences has not been limited to 17-18-year-olds. Open University, which specialises in mostly mature students, said visitors to their free Openlearn science courses had seen a six-fold increase since the start of the pandemic.

No figures are available yet for the number of students choosing to take science or healthcare-related GCSEs, Btecs or A-levels, but one biology teacher said she had been “bombarded” with questions about Covid-19 and health since the first lockdown.

“My colleagues and I have definitely noticed more pupils asking us how viruses spread and how Covid was caused by climate change,” one Leicester secondary school teacher told HuffPost UK.

“Some of them – including kids who have never expressed much of an interest before – specifically requested I teach them about the Spanish Flu of 1918 and how it had wiped out a lot of young people.”

We want to be able to protect our families and loved ones and stop the next pandemic.”

This recent interest among her students may be partly because some have been tragically impacted by the virus. “We’ve had kids who have lost grandparents and parents to Covid, so it’s definitely something that has played a huge part in their lives.”

One such case is 17-year-old Mo from Sheffield, who has lost three family members to Covid-19 in the past year including both his grandmothers.

He tells HuffPost UK that although he did have some interest in science before the pandemic, he had only planned to study physics at A-level alongside English and history. “It wasn’t until my [maternal] grandma got sick in April that I became interested in biology and medicine,” he told HuffPost UK.

Mo is now taking biology, chemistry, physics and history at A-level and he plans to study biomedical sciences at university in 2022. “I’m not at all surprised that more young people are choosing to study science than ever because of Covid-19. We want to be able to protect our families and loved ones and stop the next pandemic.”

“I think our [Muslim] community here were given confusing or bad messaging when the pandemic first broke out. No one was wearing masks and a lot of people got sick really quickly and weren’t self-isolating.

“Becoming a scientist would allow me to go back to my community and give them the right information, so we can stop something as deadly from happening again.”

Exam boards Pearson, OCR and the International Baccalaureate said it was too early to say whether there had been an increase in science GCSE and A-level courses.

But a new Natural History GCSE is currently under consideration by the government, which OCR said reflected the growing interest and appreciation of the environment during the pandemic.

The proposal would focus on biodiversity, ecology and conservation in order to teach pupils to “understand what their role should be and could be in protecting for the future”.

In a public consultation with more than 2,500 responses from young people, teachers and naturalists, the exam board received suggestions of topics that were “inspired by the current pandemic”.

One student proposed including biosecurity as a topic and another said they would want to learn “how land-use change could lead to more pandemics in the future”.

Jill Duffy, chief executive of OCR, said they were “stunned” by the enthusiasm for the Natural History GCSE proposal. “We know that young people are very engaged by the debate on the environment but the pandemic seems to have made everyone appreciate the value of nature even more,” she said.

In response to a parliamentary question last summer on the proposal, schools minister Nick Gibb said the government was “exploring the option of introducing a new GCSE in natural history after receiving a proposal from exam board OCR, but have made no commitment at this stage”.

One student, 15-year-old Kabir Kaul, said lockdown “encouraged me to appreciate and value the wildlife on my doorstep a lot more” and the pandemic had led to an increase in interest in his school’s wildlife society.

″I have seen more members share their bird sightings, and some often ask which bird feeders are suitable for different species,” he told HuffPost UK.

“With more of my generation appreciating, and in a small way, protecting the biodiversity around them during the pandemic, I am optimistic that this knowledge will stay with them in the long-term.”

Pearson BTEC— Help You Get Where You Want to Be!

Microsoft HoloLens apps to be piloted with 'Hogwarts for the MoD' chapesses, chaps