Posted by Eric Grunau from huffingtonpost.co.uk·Jun 10 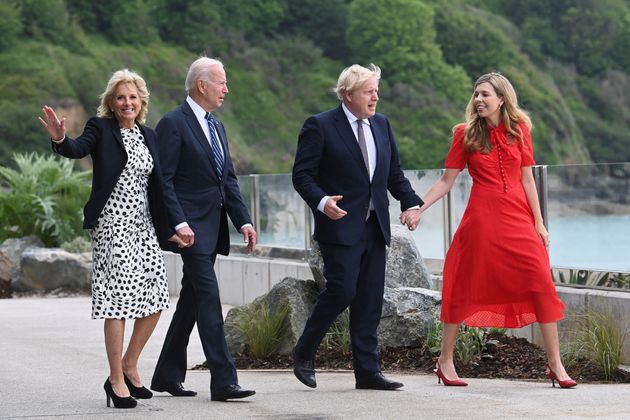 Imagine the nerves of hosting the first party for your group of friends after a year and a half in Covid lockdown.

Now imagine that your 12 guests are the leaders of some of the world’s richest countries and their spouses.

This is the challenge facing Boris Johnson at this weekend’s G7 summit in Cornwall.

And true to form, the prime minister has taken a massive risk by choosing to invite the likes of Joe Biden and Angela Merkel to a barbecue on the beach… in Britain.

The danger of relying on the UK’s changeable summer weather has already been highlighted after Johnson and Biden were forced to move their first ever face-to-face meeting indoors at the last minute on Thursday, as Cornish “mizzle” (mist/drizzle) shrouded the beautiful island of St Michael’s mount.

The PM will be hoping it clears in time for the Saturday night barbecue so leaders get a clear sight of the Red Arrows flypast as they dine on barbecued sirloin steaks and local lobster on the Carbis Bay sand.

And if a beach barbecue in 15C potentially cloudy weather wasn’t risky enough, leaders will be asked to stay outside after dinner to listen to sea shanty group Du Hag Owr while enjoying baked brie, hot buttered rum and toasted marshmallows around fire pits on the beach.

Despite the boho stylings sparking fresh speculation about Carrie Johnson’s influence over her husband, the PM’s official spokesperson told HuffPost UK she did not play a role in the decision to hold a beach barbecue, although she was closely involved in the partners’ programme for the weekend.

If Saturday night’s event is a risk, Johnson should have some credit in the bank from the Friday when he will host a reception with senior royals including the Queen, Prince Charles, Prince William and Kate, followed by a lavish dinner among the biomes of the Eden Project.

The menu for Friday night, cooked by Emily Scott, chef at the Watergate Bay hotel near Newquay:

The menu for Saturday night, cooked by Simon Stallard, from the Hidden Hut in Portscatho:

Telio founder loses lawsuit, judge finds that he “did not act honestly or reasonably”