In this article, we are going to talk about Surface Heat Exchanger and Plate Heat Exchanger. First, we give a brief definition of both, then we examine the types and components of each and how each works. Read this article to the end.

As defined by Wikipedia: A plate heat exchanger is a type of heat exchanger that uses metal plates to transfer heat between two fluids. This has a major advantage over a conventional heat exchanger in that the fluids are exposed to a much larger surface area because the fluids are spread out over the plates. This facilitates the transfer of heat, and greatly increases the speed of the temperature change. A plate exchanger consists of a series of parallel plates that are placed one above the other so as to allow the formation of a series of channels for fluids to flow between them. Read more

A plate heat exchanger comprises a series of parallel plates placed one above the other to form a series of channels for the flow of fluids between them. The space between two neighboring plates forms the channel through which the fluid flows. 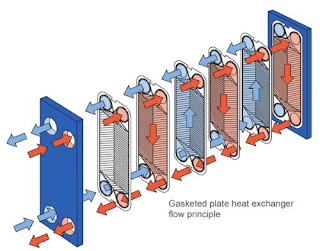 Another type of heat exchanger is called "scraped surface heat exchanger". This is mainly used for heating or cooling with high-viscosity products, crystallization processes, evaporation and high-fouling applications. Long running times are achieved due to the continuous scraping of the surface, thus avoiding fouling and achieving a sustainable heat transfer rate during the process.

Scraped surface heat exchanger is made up of a jacketed cylinder with a spinning dasher that holds rows of scraper blades. When the product is being pumped into the cylinder, the heating or cooling medium is being circulated between the cylinder and the jacket. Steam, vapor, or a refrigerant such as ammonia or freon may be used as the medium.

What do you know about heat exchangers and their types?