Analysis of Potential Impact of COVID-19 on Vegan Cheese Market 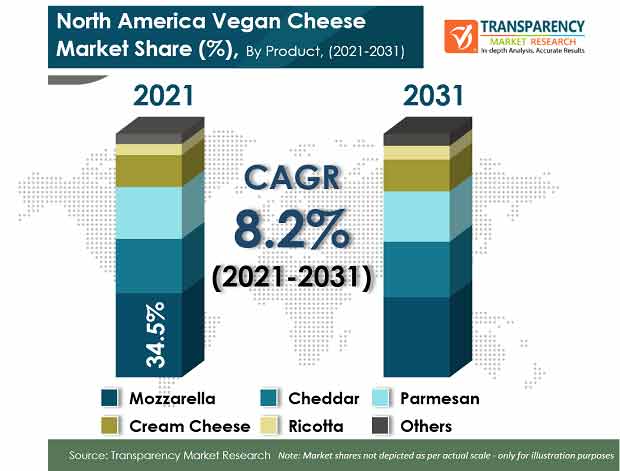 The global dairy industry is experiencing unprecedented level of competitiveness and change, owing to the rise of viable plant-based alternatives in a variety of categories. Vegan cheese is increasingly being used in baking products, vegan snacks, and fast food items such as pizza and burgers since it is cholesterol-free.

Plant-based alternatives are no longer considered niche items that need limited shelf space. Manufacturers will see impressive sales opportunities as the vegan cheese market continues to develop. Furthermore, a wholesome plant-based diet can be less expensive than an omnivorous diet. This is fueling the demand for mozzarella, cheddar, parmesan, ricotta, cream cheese, and other cheeses.

Another encouraging factor is the rise of customer health consciousness, which is driving up sales of plant-based foods. The health & wellness industry has historically performed well and health-related spending has increased significantly.

The increase in customer perception of lactose intolerance is a major driver of the global vegan cheese market. As a result, vegan cheese, vegan meat, and vegan yoghurt are increasingly common among consumers. According to a report conducted by the National Library of Medicine in 2018, approximately 65 percent of the human population has difficulty digesting lactose after infancy.

Furthermore, a growing number of grocery stores and outlets is beginning to stock plant-based cheese varieties. The change in lifestyles coupled high expenditure on high quality products income has contributed to a shift in consumer eating habits, and has made numerous desserts and flavors available to consumers.

The rising popularity of vegan and vegetarian food has caused a shift in the food industry. According to the Plant Based Foods Association (PBFA), the vegan retail food industry’s worth grew by 11.4% in March 2020 and hit a staggering $5 billion. With more plant-based choices on grocery store shelves and restaurant menus, the food industry is responding to these demands.

Due to increased awareness of benefits of plant-based dairy products, availability at grocery stores, and increasing trend of flexitarian diet, household consumption of vegan cheese is growing at the fastest rate. It has grown in popularity among millennials due to a variety of benefits, including improved mental wellbeing and reduced severity of certain allergies.

Cheese Market - How to Leverage on Food & Beverages Industry During COVID-19 Crisis?