These Were The Most Popular US Baby Names In 2020

Posted by Robert Pedigo from huffingtonpost.co.uk·Jul 28

Baby name trends are typically shared across the United States, but there are some interesting regional and state-specific tendencies.

When the Social Security Administration released its list of most popular baby names of 2020, the agency also shared the state-by-state breakdown.

Unsurprisingly, the most popular name for girls in the country – Olivia – also dominated on the state level, taking the top spot in 29 states and Washington, D.C. However, Emma (the second most popular name) was the top pick in only two states, Florida and Pennsylvania.

Meanwhile, Ava (in at number 3) proved to be a regional favourite in the South, winning out in five states – Louisiana, Mississippi, Alabama, Georgia and South Carolina. Charlotte was the fourth most popular name nationally but the top pick in eight states.

As for boys, Liam was the most popular name in the United States as a whole and specifically in 22 states plus Washington, D.C. Oliver (number 3) was the favourite in 17 states, while Noah (number two) only led in five states.

Some interesting outliers were Henry, which ranked ninth nationally but was the top name for boys in Minnesota last year, and Harper, the top name for girls in South Dakota and West Virginia but tenth overall in the country.

Keep scrolling to find out which names are the most popular for baby boys and girls in your state. 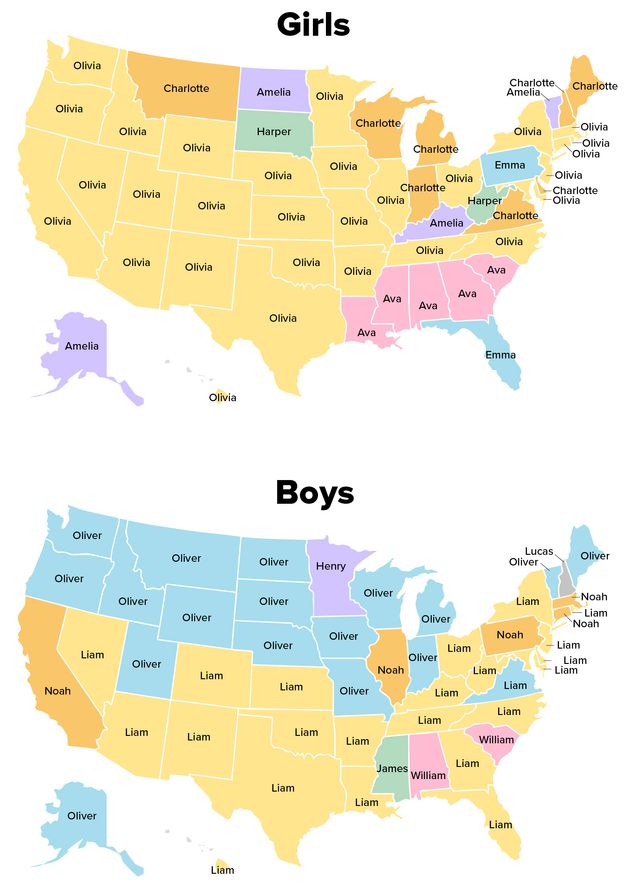 And if you’re interested in the most popular baby names nationally in the US, find the top 10 for girls and boys below.

Sculpting a Bright Future for the United States of America