Crime Film To Watch If You Liked The Irishman

Martin Scorsese’s long-waiting project, The Irishman released last year, and the audience widely expected the movie. It is an epic crime movie written by Steven Zaillian. The movie is based on a nonfiction book titled I Heard You Paint Houses by Charles Brandt.

The Irishman is praised by audiences and critics as well. It was nominated for Best Director, Best Picture, Best Adapted Screenplay, and Best Supporting Actor at 92nd Academy Awards. And she was also nominated for five awards, including Best Motion Picture at the 77th Golden Globe Awards.

The Irishman tells a crime story and follows Frank Sheeran, who is a truck driver and becomes a hitman. The movie serves loyalty, regret, corruption, and hidden American history to understand the violent subjects. The fans of The Irishman often look for similar content to watch to relive the world.

Here are a few movies that you can check out if The Irishman’s genre is your thing.

Black Mass is a biographical crime drama based on the book by Gerard O’Neill and Dick Lehr titled Black Mass: Unholy Alliance Between the FBI and the Irish Mob published in 2001. 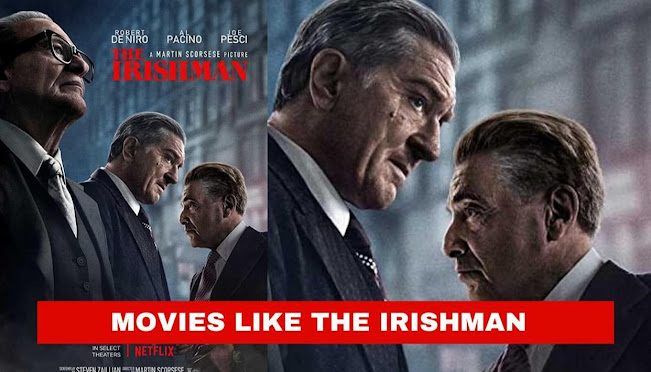 Black Mass is directed and produced by Scott Cooper and written by Jez Butterworth and Mallouk. The plot revolves around the infamous American mobster James Whitey Bulger. He is the leader of the Winter Hill Gang. He controls the organized crime in South Boston and his right hand, Stephen Flemmi, hitman Johnny Martorano, and newcomer Kevin Weeks.

Black Mass features unusual dynamic loyalty between an FBI and the gangster. It is praised by audiences and as well as the critics. The film got an approval rating of 73% based on 284 reviews, with an average rating of 6.7/10. As Whitey Bulger, it was one of the most unique and memorable characters of Johnny Depp.

Zodiac is a David Fincher’s mystery thriller movie. The movie is adapted from a nonfiction book of the same name written by author and former cartoonist Robert Graysmith, published in 1986. The movie stars Mark Ruffalo, Jake Gyllenhaal, and Robert Downey Jr.

The movie is a masterpiece of a titular serial killer and the obsessive investigation into the unsolved horrors. The plot follows an unknown man who attacks Mike Mageau and Darlene Ferrin with a handgun in Vallejo, California. And after one month, the San Francisco Chronicle receives encrypted letters by the killer, who is calling himself ‘Zodiac.’

Zodiac is widely accepted by the critics and audiences and had a gross budget of $84 million against a $65 million production budget. It received an approval rating of 89% based on 252 reviews with an average rating of 7.63/10. While the audience polled by CinemaScore gave the movie grade “B-” on the scale A+ to F. The film’s fantastic editing and elegant shot tells the story very efficiently and does not miss any tiny details of dates, facts, styles, names, and even the period’s music. Zodiac is nominated for various awards. Director Fincher won the award of “Best Director” from Dublin Film Critics’ Circle in 2007. To the fans who loved Scorsese’s The Irishman, Zodiac is for you guys.

Based on an autobiography of the Australian criminal Mark’ Chopper’ Read, it is a crime drama movie directed and written by Andrew Dominik. The film is also Dominik’s directorial debut. The movie stars Eric Bana in the title role. It co-stars Simon Lyndon, Vince Colosimo, David Field, and Kate Beahan.

Chopper has received positive reviews from critics and audiences and won the award of Best Direction, Best Actor, Best Supporting Actor, and Best Adapted Screenplay at the AACTA Awards. And as Chopper, Bana gave outstanding performances. The film’s screenplay opens with correctional officers watching an interview of Mark Brandon “Chopper” Read on TV in a prison cell.

The director and writer, Andrew Dominik, debuted the movie with Scorsese’s energy and sympathized with the devil character. It got an approval of 72% on the Rotten Tomatoes, and it did terrific business on the box office too.

The movie features two great actors Al Pacino and Johnny Depp, in the crime drama movie directed by Mike Newell. The movie is based on the nonfiction book Donnie Brasco: My Undercover Life in the Mafia, written by the author Richard Woodley and Joseph D. Pistone.

Depp performed the character of the conflicted “Pistone,” his entire perception of evil and well altered after he entered as a gangster. And Pacino gives him some best performances as the aging hitman “Lefty,” who plays Brasco’s partner in crime.

The above are a few lists of movies from the crime thriller genre. I hope you will have some good films to watch and enjoy with your friends and family.

Inside the Mind Of… Mitch Joel

Netflix confirms it's making a sequel to its Will Smith film 'Bright,' which critics hate but tons of people have watched